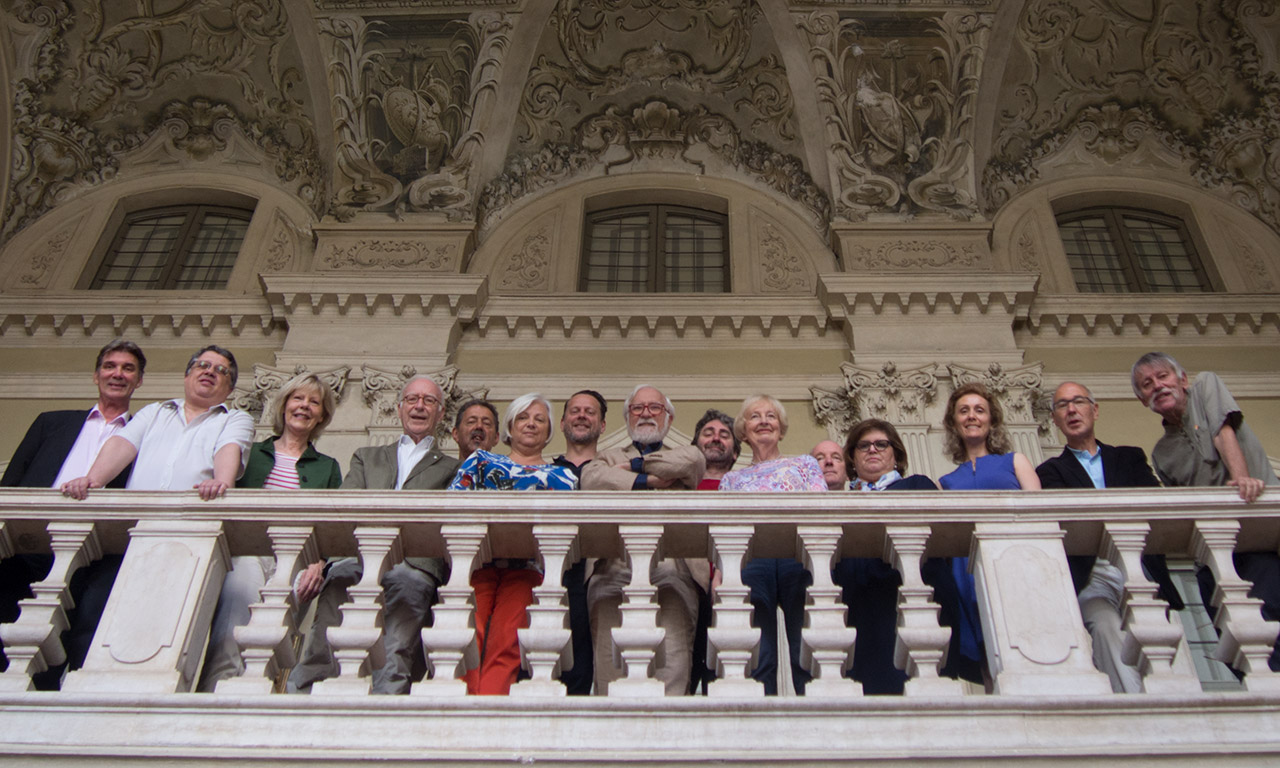 The Akademia was historically a school dedicated to Athena, the goddess of wisdom, outside the city walls of ancient Athens. Today an Academy is an institution of higher learning, research and honorary membership. The Academy is the scenario where innovations are discussed profoundly and validated.

EMA looks at innovation related to the museological philosophy, the museographical language and practice, as well as the role of museums in contemporary society.

Although museums started a long time ago, they are still searching for their identity. Europe has given the main contribution to the big family of museums. That’s why there is a need for a European Museum Academy.

The European Museum Academy, registered as a non-profit foundation in The Netherlands, was established on the occasion of the tenth anniversary of the loss of the distinguished museologist Kenneth Hudson (1916-1999) by a group of professionals active in the museum field and the cultural sector in general, this group has worked with Kenneth Hudson for many years in the context of the European Museum of the Year Award scheme, under the auspices of the Council of Europe and under the patronage of HM Queen Fabiola of Belgium, in the area of industrial archaeology and in other fields which benefited from the pioneering of Kenneth Hudson.

The aims of the European Museum Academy are to preserve the legacy of Kenneth Hudson and to disseminate the values and the pioneering intuitions and views of his museological thinking among the new generations of museum professionals as well as cultural professionals active on a European scale.

The EMA Foundation is engaged in developing research in the field of museum innovation, stimulating new ideas and experiences and offering its services as an incubator for new talents and new programmes in order to improve the quality of museum services and of the museological discourse at the European level.

The academy is not an educational organization (although regularly involved in professional training and exchange programs) but intends to be a society of museum experts of different national and cultural backgrounds united for the advancement of museological knowledge based on a curriculum of proved capacity in conducting innovative museum projects. The academy identifies in museums a relevant tool to face socio-economic and cultural challenges in contemporary society and stresses the role of the modern museum as a meeting place and as a most promising forum for the development of scientific debate, creativity, social cohesion, and cultural dialogue.

EMA does not run courses directly. We are not a university or a school. We are an organization with the mission to gather experts, build knowledge, share the results of our professional experiences and theoretical reflections incentivizing the museological dialogue in Europe.

Over the years we have elaborated a specific model, the “EMA Model”, which has proved sustainable by activating permanent cooperation with different universities and research centres in various countries. This cooperation is mostly at post-graduate level and always in a transnational context.

We contribute to courses in several European countries, giving advice to design curricula and special programs, providing speakers and didactic materials, organizing seminars and study tours, encouraging best practices, promoting innovation in the contents and in the teaching methodology.

The governance of EMA is in the hands of a committed group of experienced professionals. They share the ideal of contributing their expertise to support museums and galleries in their quest for quality, and they understand the issues collections are facing in their search for meaningful interactions with today’s audiences.

He worked as leader of the exhibit development team of the Naturalis Museum, together with general director Wim van der Weiden, later becoming director of public services, vice-president, and an interim president. He worked too for the public libraries, the Dutch Cultural Heritage Agency and still as an examiner in a strategic management educational institute. He is a biologist and strategic marketeer by training, and nowadays focused on (IT) information strategies and on positioning and branding in not-profit organizations. He is author and co-author of books including ‘Businessmodellen’ (Dutch) and ‘Mastering a Museum Plan: Strategies for Exhibit Development’ (English).

He is EMA’s Scientific Director. Scientific Director of the Executive Master in European Museology at the IULM University of Milan; also teaches Museography at the Post Graduate Master Course in Industrial Heritage as well as in the Erasmus Mundus Course on Industrial Heritage within the Course of History, Faculty of Letters and Philosophy, of the State University of Padua. Member of the Scientific Committee of the Museum of the Duomo of Milan. Former Director of the European Museum Forum (1999-2009) and member of the Jury of the European Museum of the Year Award from 1983 to 2009. In 1993 the King of Spain awarded him the Cross of Officer of the Orden de Isabel la Catòlica.

She is EMA’s President, and from 1986 to 2000 Director and programme manager at the Museum of Recent History Celje. In 2000 she was appointed Minister for Culture in the Government of the Republic of Slovenia. National Correspondent of the European Museum Forum since 1997. From 1998 to 2001 she was also President of the Board, organiser of annual national meetings and many international meetings of the Slovenian Museum Association. She is now Head of the International School of Museology of Celje where she is actively involved in the organisation of seminars, lectures, and workshops. She is an active tutor and professor specialized in work with children and youth. She is also Director of the Forum of Slavic Culture, Board member of ICOM-ICTOP and Board member of Hands-on! International.

Trained as an historian, he became director of Museon, the National Museum for Education and the first space theatre in Europe, Omniversum, both in The Hague. He was a member of the board of the Dutch Museum Association and one of the initiators of the Dutch Museum Pass. He was also chair of ICOM Netherlands and a member of the Executive Council of ICOM. (International Council of Museums). In 1989 he became a member of the European Museum Forum and since 2002 was its chair. For a period of 12 years, he was director of Naturalis, the National Museum of Natural History in Leiden. In this period a completely new museum was built under his supervision. Since October 2003 he has been involved in the promotion of Dutch history. In that capacity he wrote the first draft for the future National Historical Museum.

He is EMA’s Director. He was CEO of the Jamtli Foundation (a museum and heritage organization in central Sweden 2001-2019, and senior researcher at The Nordic Centre of Heritage Learning & Creativity since 2005 — an R&D organization for learning through heritage engagement, and the director of the European Museum Academy since January 2019. Guest professor in heritage learning and regional development at Linköping University since 2010 and associate of Pascal Observatory since 2007, as well as associate of European Expert Network on Culture and was appointed expert on culture and adult education by the European Commission in 2011. President of the Association of European Open-Air Museums since 2017. Expert and jury member in the European Museum Academy since 2014 and appointed by the Swedish Council of Higher Education from 2017 as expert for assessment of EU applications in the Erasmus Plus programme. Holds a master’s degree in history from University of Copenhagen 1985 and a PhD degree in education and history from The Danish University of Education 1996.

EMA fosters a substantial international network of talented and experienced people who are well-placed to initiate strategic change and innovation. Our network consists of:

Our permanent partners and our Partnership Scheme helps to support our activities. Find out more »

We will send you a bimonthly newsletter, to keep you updated on new articles, awards and events